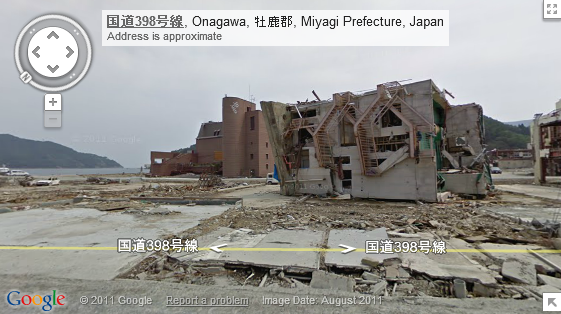 Back in July, we announced our initiative to digitally archive the areas of Northeastern Japan affected by the March 11 earthquake and tsunami. Today, we’re making good on that promise—after driving more than 44,000 kilometers through the affected regions, 360-degree panoramic imagery of those areas is now available through the Street View feature in Google Maps. The images can also be viewed via a special website called “Build the Memory,” where you can easily compare before and after shots of the towns changed by these events.

A virtual tour via Street View profoundly illustrates how much these natural disasters have transformed these communities. If you start inland and venture out toward the coast, you’ll see the idyllic countryside change dramatically, becoming cluttered with mountains of rubble and debris as you get closer to the ocean. In the cities, buildings that once stood proud are now empty spaces.

In the bottom left corner of each image you’ll also see a month and year that tells you when a particular photograph was taken. When looking at images of the magnificent cities side-by-side with images of the ruins left in their place, this additional context demonstrates how truly life-changing this tragedy has been for those who live there and witnessed the destruction of their homes, neighborhoods and even entire districts. This timestamp feature has been the most requested Street View feature for the last few years, and it is now available on Street View imagery worldwide. Professionals such as historians, architects, city planners and tourism boards—as well as regular users including travelers and home-buyers—can now get a sense of how fresh the online photos are for a locations that interests them.

In the case of the post-tsunami imagery of Japan, we hope this particular digital archiving project will be useful to researchers and scientists who study the effects of natural disasters. We also believe that the imagery is a useful tool for anyone around the world who wants to better understand the extent of the damage. Seeing the street-level imagery of the affected areas puts the plight of these communities into perspective and ensures that the memories of the disaster remain relevant and tangible for future generations.

Cross-posted on the RONNIEROCKET.COM blog.