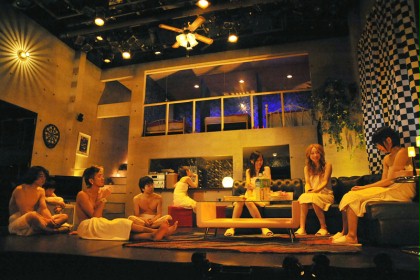 A dating evening for four couples, three beds and voyeurs

The setting is straightforward: one split-level living room, one evening, four couples, three beds, and one theme. In a luxury apartment, four men and women meet for a night. A student, a sales rep, an office worker, a nursery school teacher – strangers up until this evening – sit wrapped in towels next to each other. They chat non-stop, making superficial small talk about their jobs, favourite actors, TV series and hobbies. Time passes, and their self-consciousness slowly starts to fade. They get closer. But love is not a subject of conversation. There is only sexual gratification – this is a cool, detached sex party, free of emotion or passion. The actors remain nameless except for the labels Man 1 to 4 and Woman 1 to 4. At the end, they leave without knowing much about each other.

In Love’s Whirlpool, Japanese director Daisuke Miura, who describes himself as a child of the TV drama generation, tells the tale of the desires of a peer group that has everything it needs and buys anything it lacks. But these people only fulfil their physical rather than emotional needs. They live lives of utmost superficiality, surrounded by popping colours that match those on TV yet as lonely as late night shoppers in the supermarket.

In Japanese with German surtitles

Daisuke Miura was born in Hokkaido in 1975. Together with friends from the Waseda University Theatre Circle he founded Potudo-ru in 1996. Often labeled as ‘semi-documentary’, his style strips theatre down to the bare bones of performance in pursuit of the ‘real’. Knight’s Club employed this technique for the first time and premiered in 2000. Miura has since been taking different approaches to this style of ‘realistic fiction’. Miura received the 50th Kishida Kunio Drama Award for Love’s Whirlpool. His works Gekijyo (Violent Emotion), and Otoko no Yume (A Boy’s Dream) were adapted into a TV drama. Miura has also worked as a scriptwriter and film director. In 2010, his work could be seen in Europe for the first time when he presented Castle of Dreams at the festival Theater der Welt.